Completed in 1885, Auckland’s Historic Synagogue (by architect Edward Bartley) was used as such until 1967. In the late 1980’s it was renovated and converted into a branch of the National Bank. It is a 627 square metre Grade 1 Heritage listed building. Currently called University House, the building is on the market as at the time of writing this post.

Overall, the stencilled patterns appear to be derived from intricate Islamic arabesques with their intertwined floral forms. More elaborate variations of this pattern can be found in, for example, 12th century Mosques. 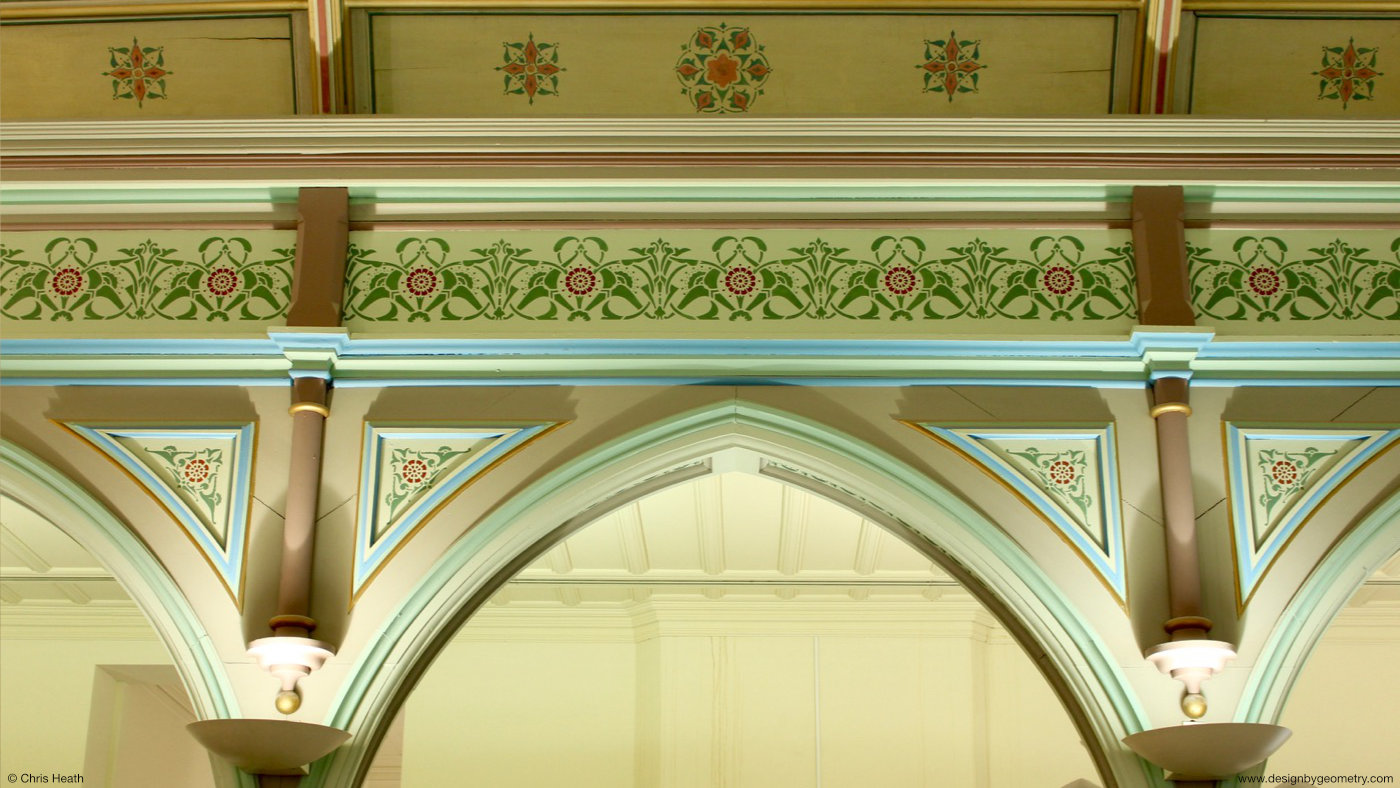 The frieze (above) has been suitably adapted to the technique of stencilling and with its large red rosettes, it has a typically Victorian feel to it; almost in the style of 19th century industrial designer, Christopher Dresser.

For the stencilling, alkyd-based enamels were mixed with raw and boiled linseed oils. These colours were then stencilled over an acrylic base that was prepared by the project’s painting sub-contractors. The oils were used to obtain a workable degree of tack and to reduce the speed at which alkyd enamels can dry.

The original patterns were traced, and then carefully redrawn. To place the patterns precisely, the stencils were cut from a role of clear PVC, and registration marks were added using permanent markers.

As a permanent record, the stencils were applied to a painted sheet of cardboard. If new stencils are ever needed, they can be traced from this board which is held by the author. 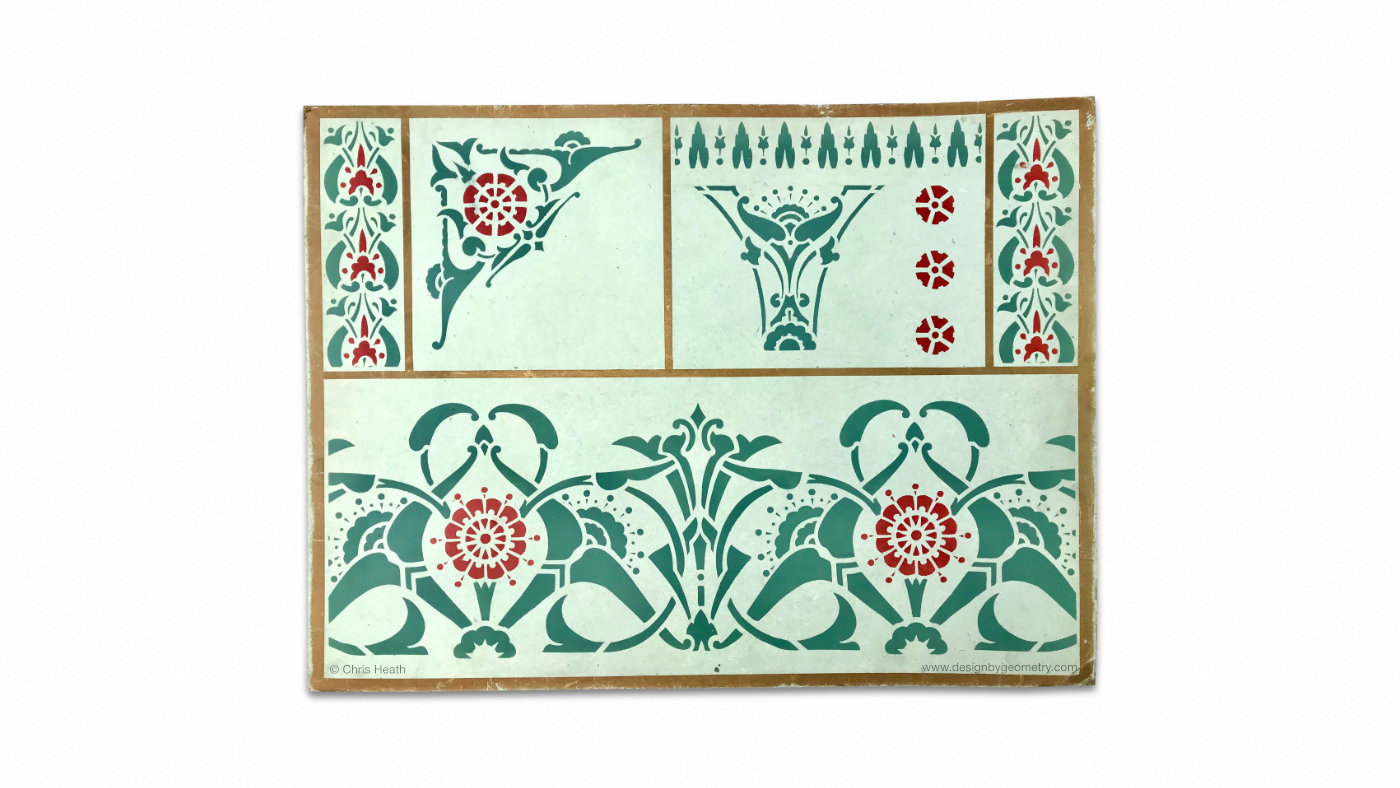 Prior to restoration in 1989, the interior was painted in shades of earthy browns. 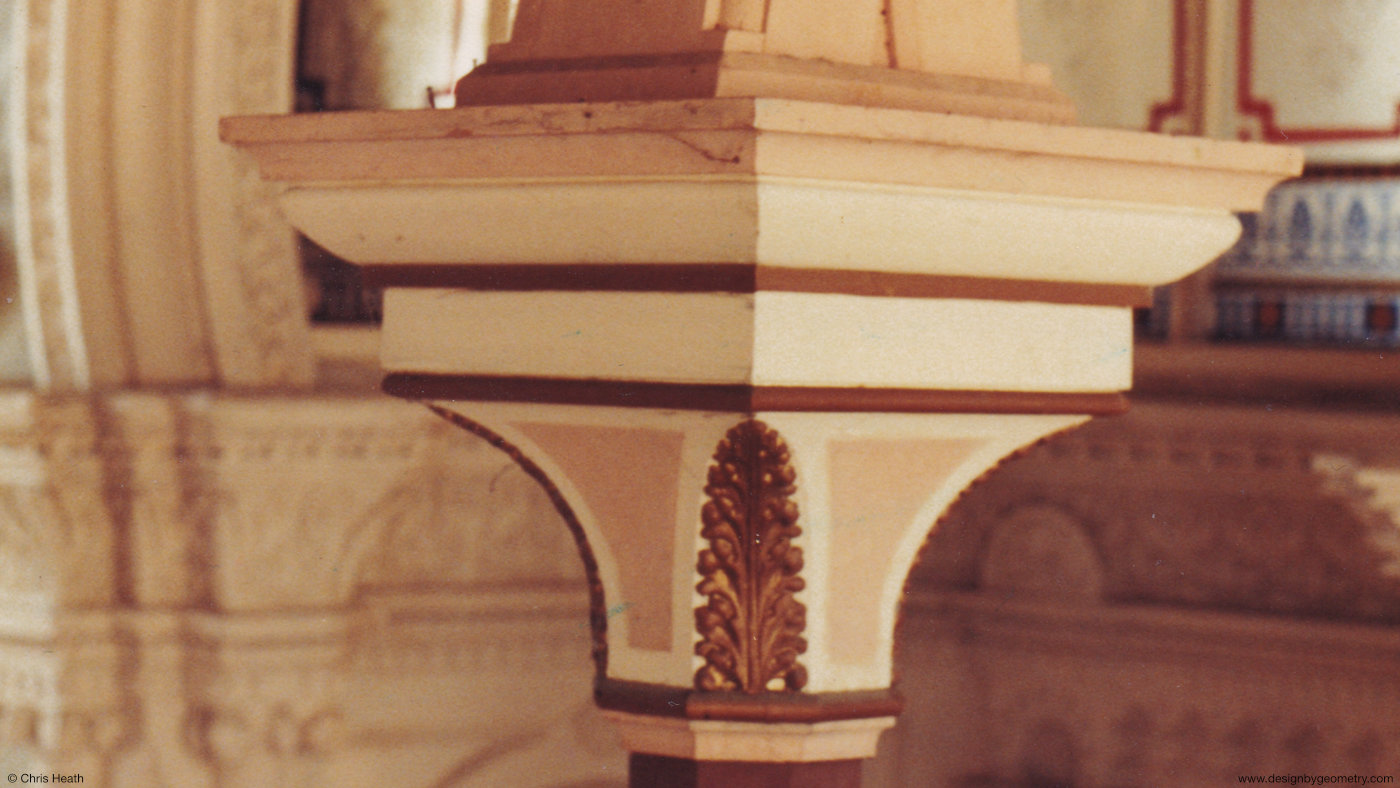 The following photo shows the original stencil patterns that were buried under coats of brown and cream paint. 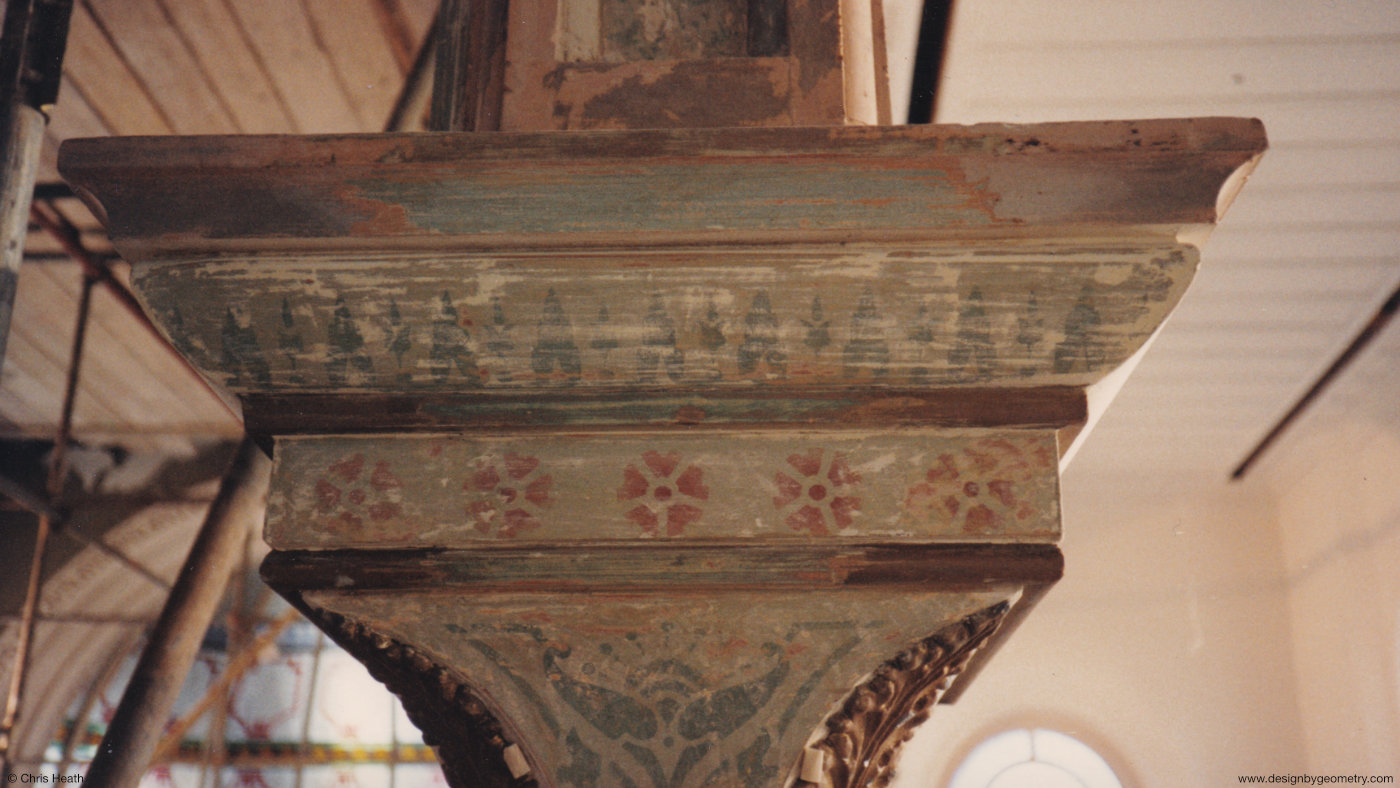 The following photo shows stencilling in progress using clear PVC stencil plates which are ideally suited for curved surfaces, and for accurate placement of the stencil on the surface. 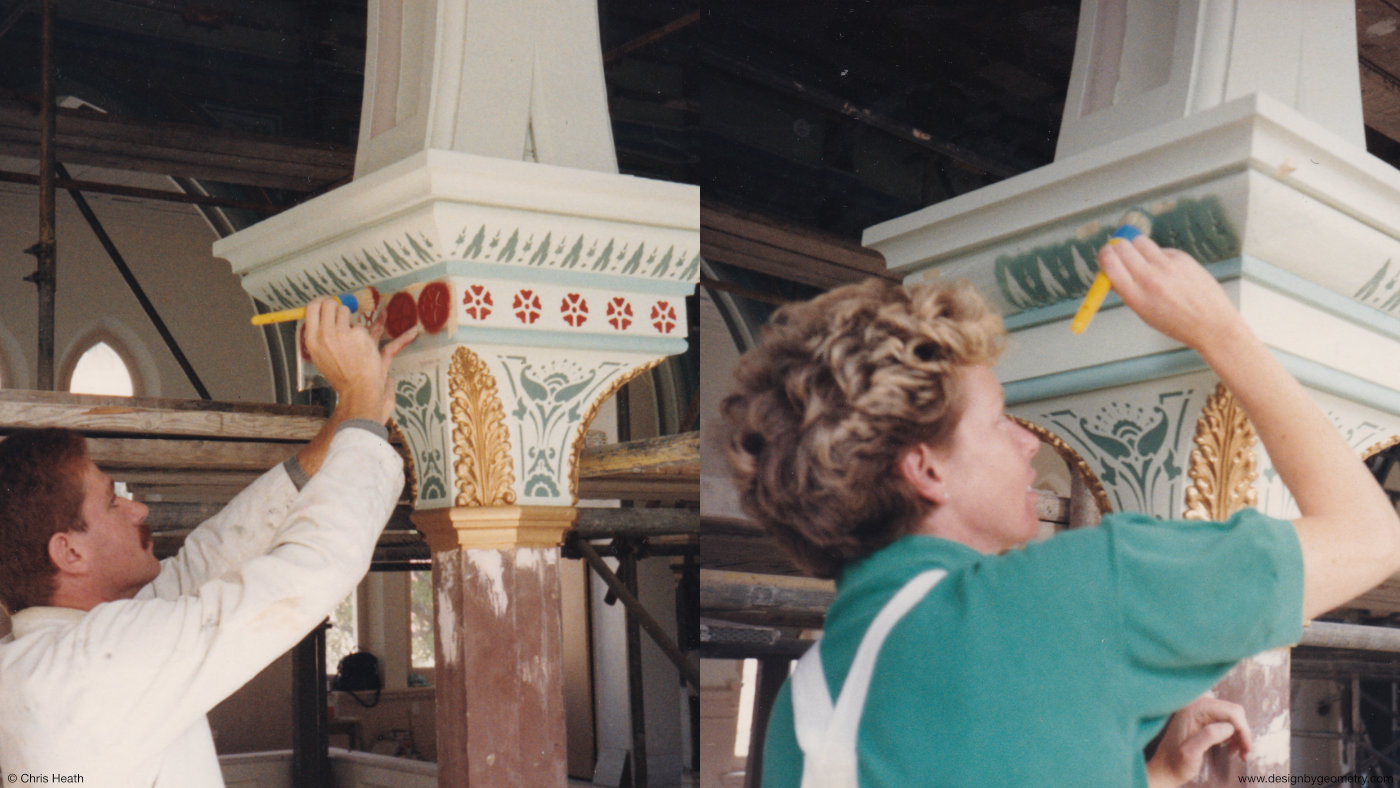 The following photo shows the completed stencils. This photo was taken in 2016. 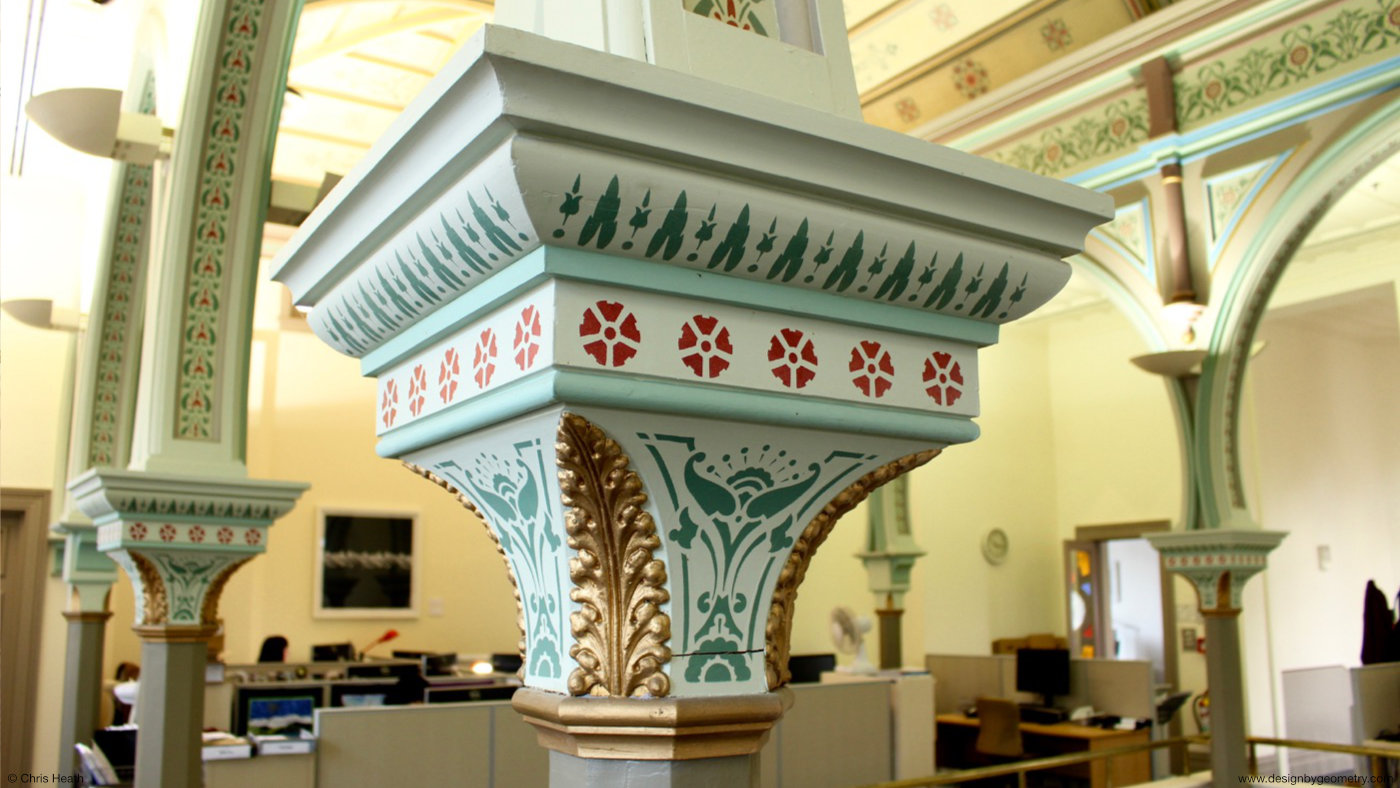 The following photo shows the original stencils that were buried below the layers of pinky brown paint. 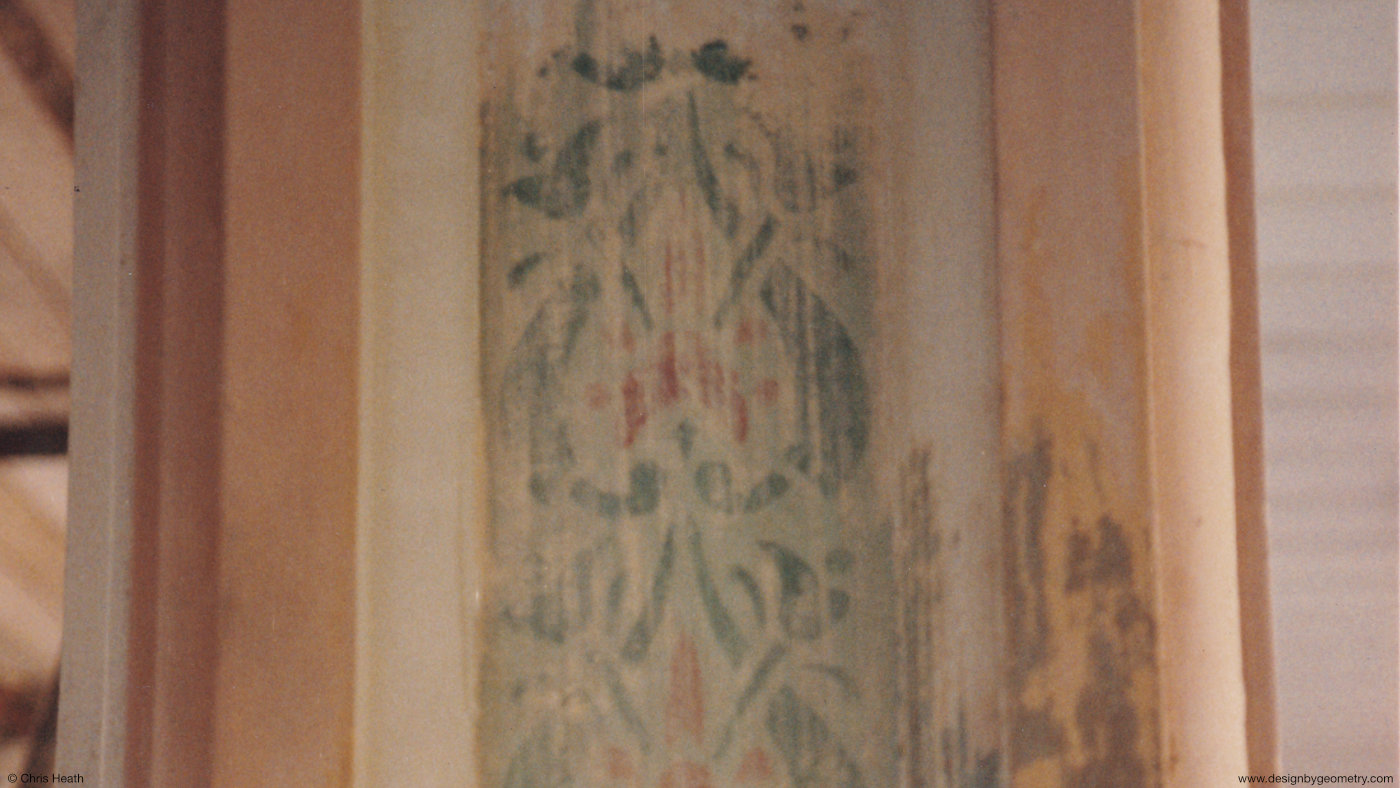 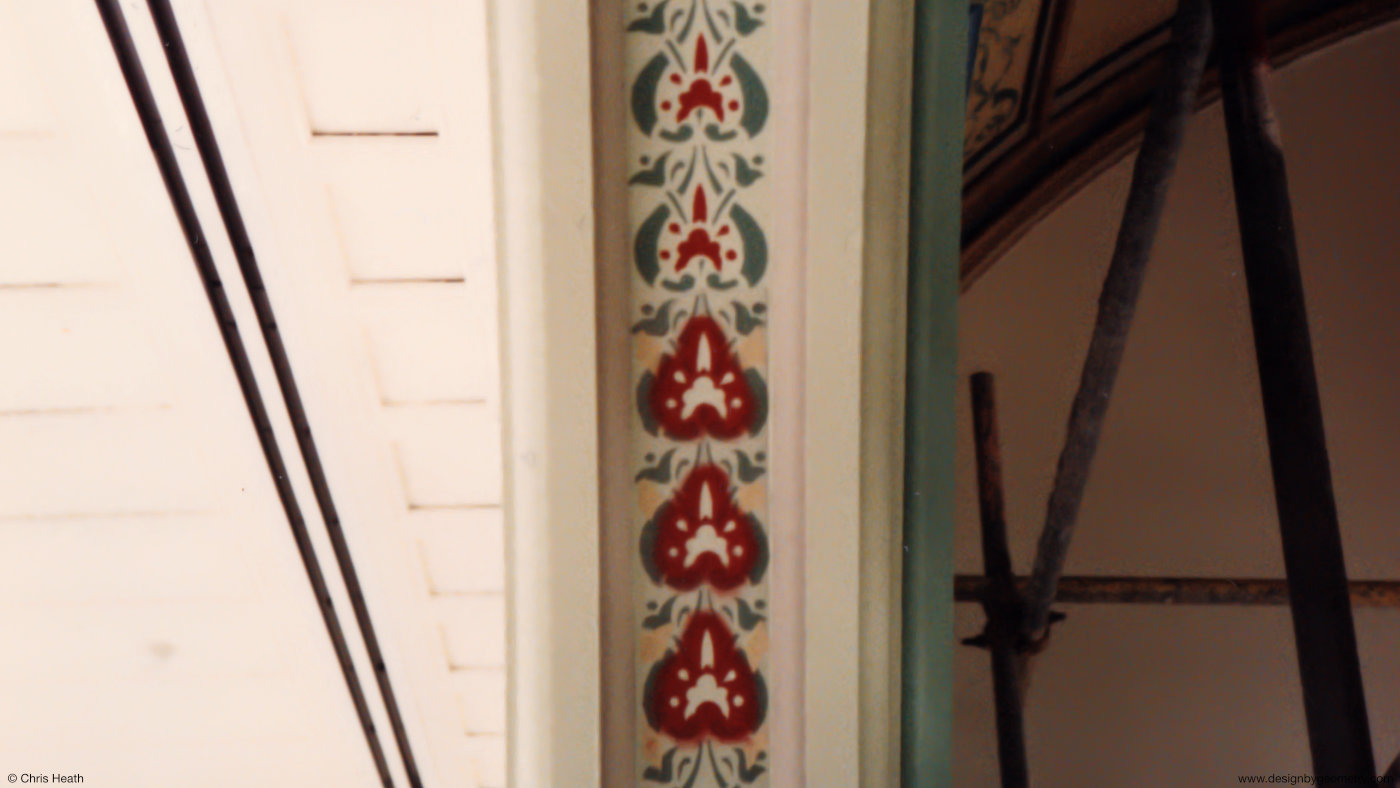 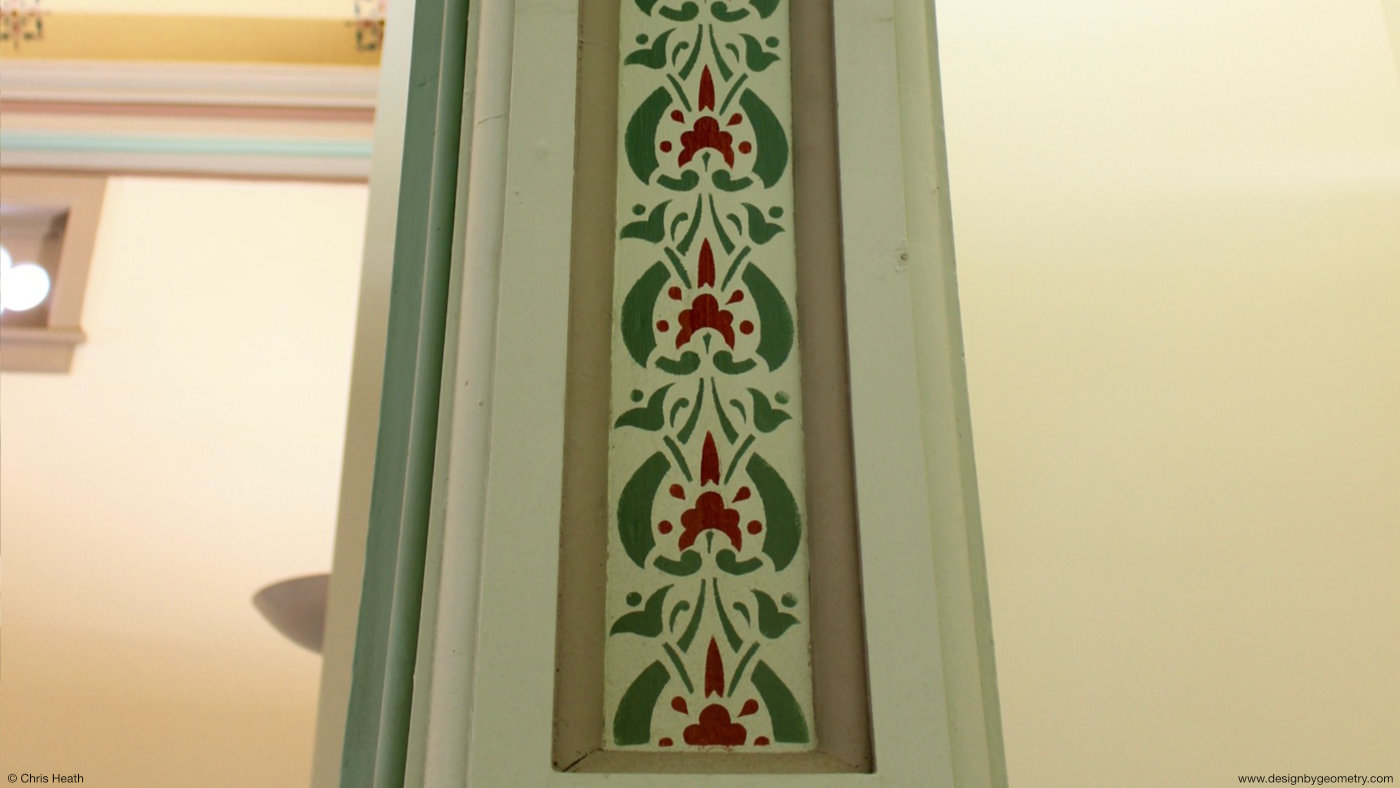 With the exception of one panel that was replaced, and carefully matched to the original by Juliet Bamford, the ceiling is still in its original condition. 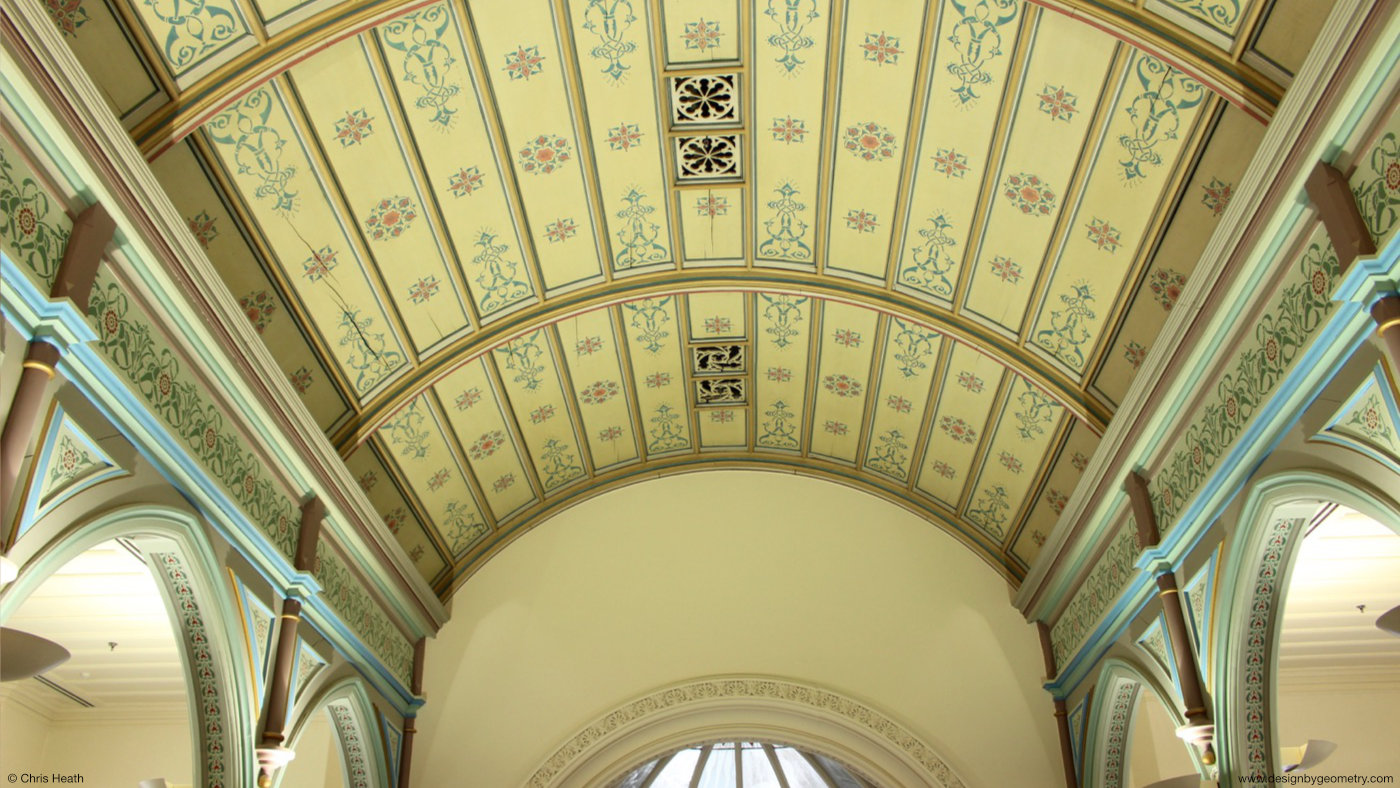 Picking the source of the plaster detailing is not that easy. It’s an eclectic Victorian mix of Romanesque, gothic and moorish detailing. 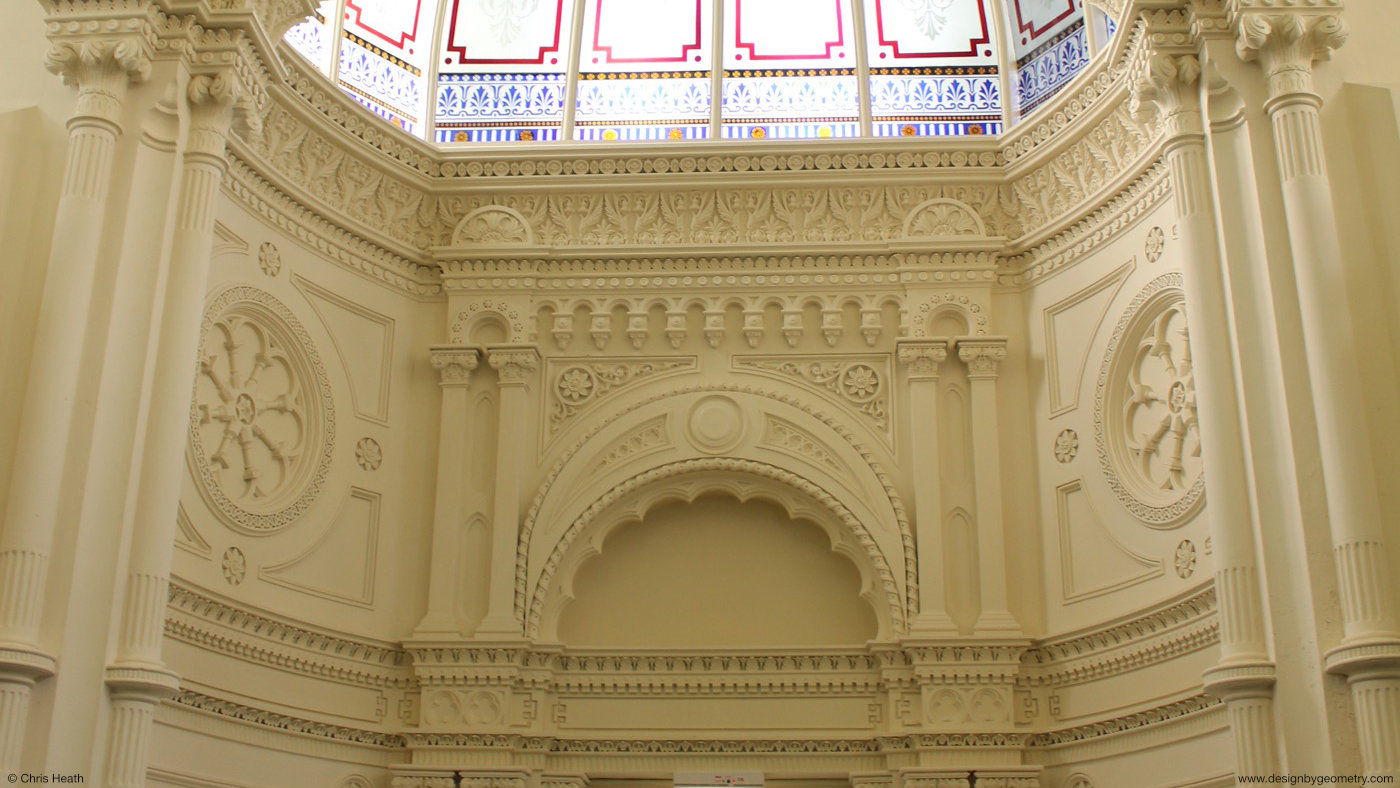 Some notable features were not reinstated in 1989. These were the Rococo styled plaster balcony panels and the chandelier.

It is unknown as to what happened to the panels. It is likely that they were disposed of in a skip during the demolition phase of re-construction. 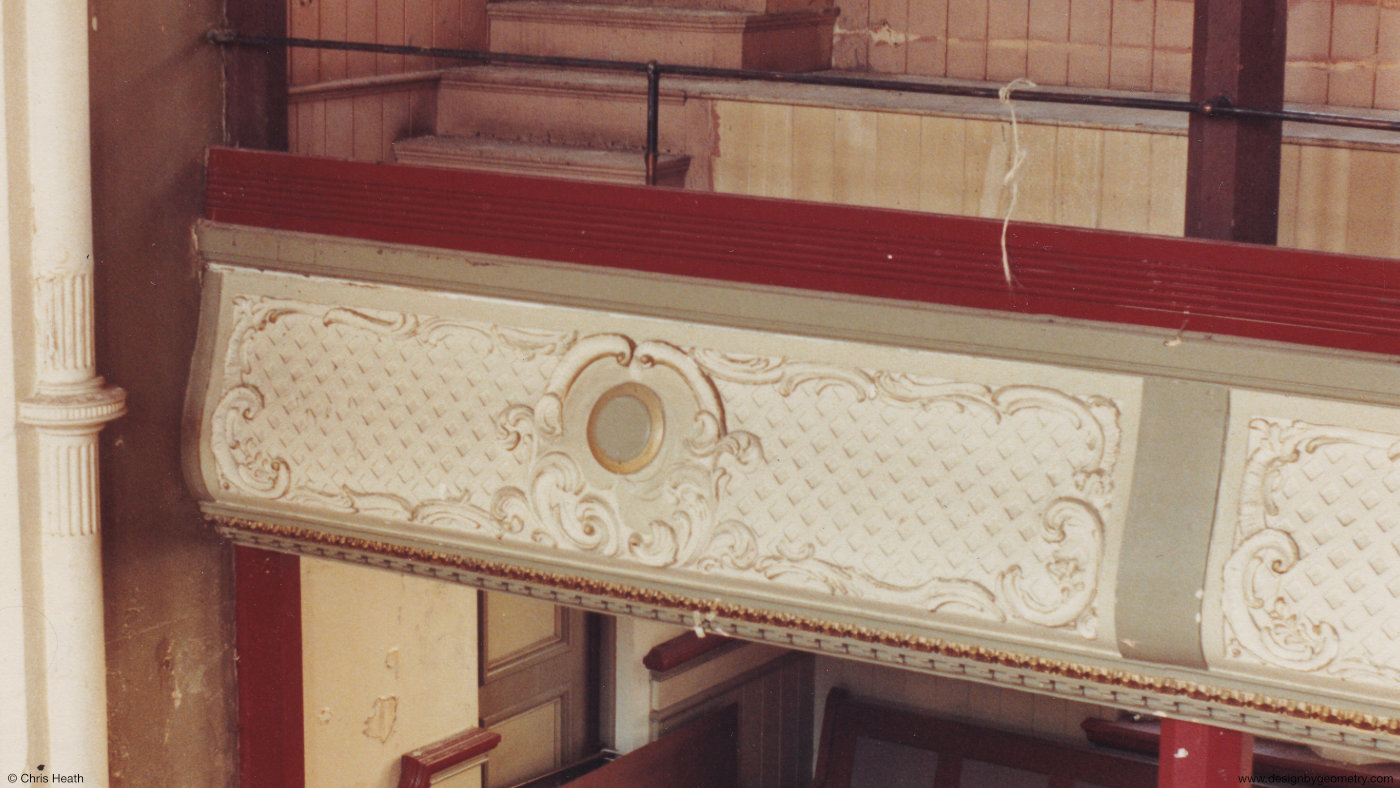 The chandelier below is now hanging elsewhere. 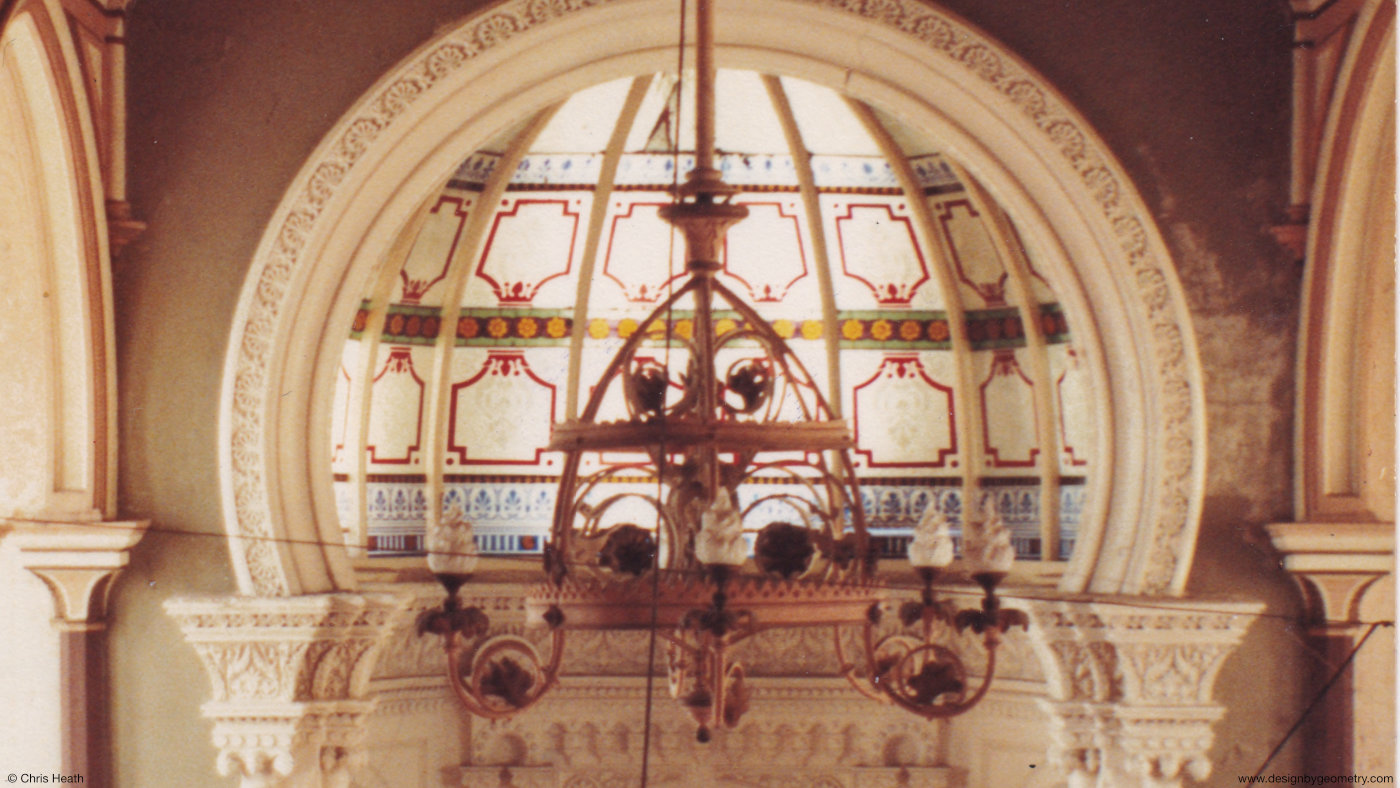 Update: The chandelier did pop up on a Google search and can be seen here:

It looks like it is hanging in the Auckland Hebrew Congregation & Kadimah School. It is also sporting a new colour scheme.

If you would like to see more photos added to this blog post, please use the contact form. There are more photos of the former synagogue taken: